If you're in Avilés, you can't miss this day trip to Covadonga. You'll see the lakes, the Santa Cueva, the basilica and Cangas de Onis. An unmissable excursion. 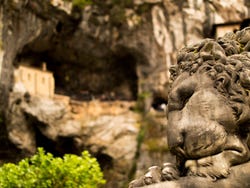 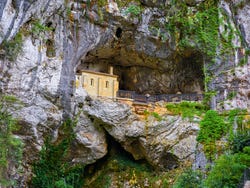 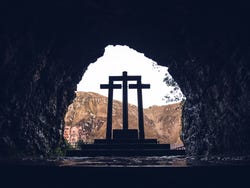 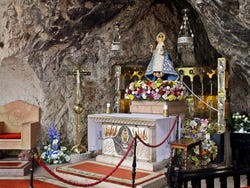 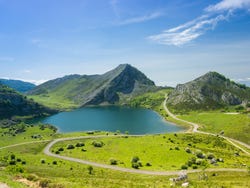 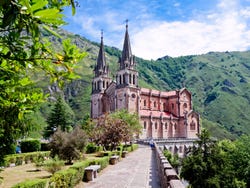 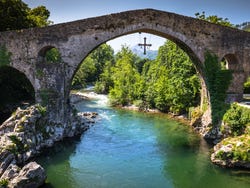 We'll pick you up at the central station of Avilés at 7:45 am. We'll get on a minibus and head east until we reach Covadonga, one of the emblems par excellence of Asturias.

First, we'll visit the wildest part of Covadonga. We'll head to the Ercina lake and the viewpoint of Entrelagos, from where you'll get to enjoy unforgettable views of the lakes of Covadonga.

After contemplating these breathtaking views, we'll go to the Holy Cave of Covadonga, home of the "Santina" and King Pelayo. While exploring the area, we'll learn about the tradition behind worshipping this virgin, as well as the history of the Battle of Covadonga.

We'll continue to travel around the area and continue on to the Basilica of Santa María la Real in Covadonga, a neo-Romanesque style temple designed by Ventura Rodríguez and completed in the 19th century by King Alfonso XII.

The next stop of the day will be Cangas de Onis, where you'll have an hour of free to explore or have some lunch in a local restaurant. You're sure to love the local gastronomy! We'll meet up again and, to end the day in the best possible way, we'll visit the Roman bridge and the Santa Cruz chapel.

We'll finish the excursion by returning to the starting point in Avilés at 5 pm.

Tours or activities will not consist of more than 24 people per group.

The activity takes place with a guide that speaks en english, although it may occasionally be done in two languages.

No rating yet
Explore the Somiedo Natural Park with this excursion from Avilés and discover the breathtaking landscapes of Asturias.
US$ 82.30
Book
like

No rating yet
Discover some of the most beautiful villages on the Asturian coast with this excursion to the Eastern marina of Asturias from Avilés.
US$ 76.50
Book
like

No rating yet
Discover the region's fishing past with this excursion to the Western Marina of Asturias from Avilés. We'll explore the area and discover its beautiful beaches.
US$ 76.50
Book