Travel back in time to the Middle Ages on this guided walking tour of Bari's historic castles and fortresses! Discover some of the most emblematic monuments in the Apulian city. 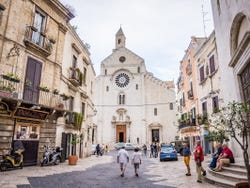 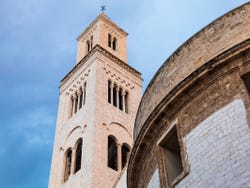 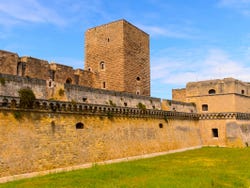 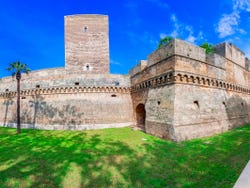 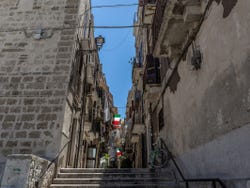 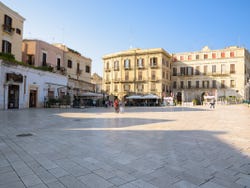 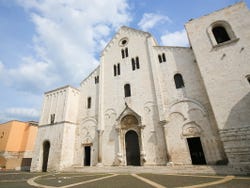 Meet your guide at the selected time in Piazza Federico II di Svevia, ready to embark on your two-and-a-half hour guided walking tour of Bari's impressive Medieval architecture. Delve deep into the historic centre of the city, known as Barivecchia, in search of the ancient castles and fortresses that have preserved the spirit of the Middle Ages in Apulia.

Begin with a visit to one of Bari's strongholds: the Castello Normanno-Svevo. After buying your entry tickets, you'll head inside the 12th century castle, which is one of the emblematic sights of the Italian city. As you explore its impressive rooms and courtyards, your guide will tell you all about its long history. What's more, you'll stop by the fort's gallery to admire its collection of art from the Romanticism era.

Having explored the Norman fortress, you'll head to Bari Cathedral. Wandering through the narrow stone streets, you'll pass by some of the city's most interesting sights, like Arco Basso and the so-called artist's street, before reaching the cathedral to marvel at its impressive white stone façade and tower.

The next stop on your guided tour of Bari will be the Basilica di San Nicola, an 11th century Romanesque church which is home to the remains of Saint Nicholas. Standing outside the church, you'll learn all about its striking architecture thanks to your guide's explanations.

Stroll onwards to the Forte di Sant'Antonio, the ancient fortress located at the city's old port. This was one of the four bastions that defended the city from the threat of invasions up until the 19th century.

Your guided tour of Bari will come to an end in Piazza del Ferrarese, the square that marks the entrance to the old town from the modern city centre.

US$ 28.60
Free cancellation up to 48 hours before the service starts
Book

10 / 10 4 reviews
Settle into a tuk-tuk and explore Bari in this unique mode of transport. Discover the castle, the basilica, the cathedral and Apulia's cultural traditions!
US$ 53.60
Book
like

10 / 10 3 reviews
Take this private tour of Bari with an expert English-speaking guide and discover the intruiging secrets of this fascinating city!
US$ 143.10 per group
Book
like

8 / 10 1 review
Indulge your tastebuds on this unmissable food tour of Bari. Discover the Apulian city through its most typical delicacies!
US$ 41.70
Book