Discover Guatemala's history with this detailed tour of Guatemala City and Antigua Guatemala. You'll get to know the old colonial town and the modern side of Guatemala. 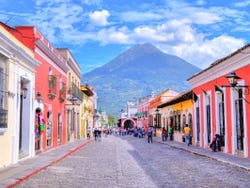 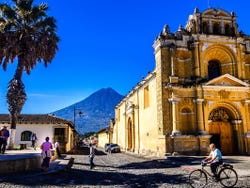 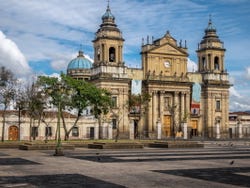 We'll pick you up from your hotel in Guatemala City at 8 am and head to the old colonial town of Guatemala.

After approximately an hour, we'll arrive in the centre of Antigua Guatemala and our first stop will be the Central Park. Here we'll encounter the Palacio de Los Capitanes Generales (Governor's Palace), the old city council and San José Church which was previously the city's cathedral.

You'll have the chance to have your photo taken beside the famous Fountain of the Mermaids, originally built in 1739 and inspired by the Neptune Fountain in Bologna, Italy. It was created based on the popular myth that the water in the fountain represents purity, while the mermaid represents temptation and sin.

Next, we'll visit another cathedral in Antigua Guatemala, known as the Second Cathedral, and admire the contrast between the baroque facade and smooth columns.

We'll stop to sample a traditional dish at a local restaurant (not included), and then head to the modern city where we'll take a tour around Guatemala City.

During this visit around the modern district, we'll walk down the Avenida Las Américas until we reach the city centre. Here we'll see some governmental buildings, including the Supreme Court, the Finance Ministry, the city council and the Bank of Guatemala.

We'll finish off the tour by exploring the Plaza Mayor de la Constitución where we'll also find the Catedral Metropolitana.

We'll head back to the hotels in Guatemala city at approximately 5:30 pm.

The activity includes pick up from hotels in Guatemala City. Check out the list of hotels below. If you aren't staying in any of these hotels, choose the one closest to you for pick up.

Pick up and drop off at hotel.

Free! Free cancellation up to 24 hours before the activity starts. If you cancel under this time or do not show up, you will not be refunded.
like Free

10 / 10 2 reviews
Delve into the history and architecture of the beautiful Guatemalan capital on this free walking tour of Guatemala City.
Free!
Book
like

10 / 10 1 review
Ever dreamt of hiking up an active volcano? Now's your chance! Climb up Pacaya Volcano on this tour from Guatemala City.
US$ 69
Book
like

8 / 10 1 review
Immerse yourself in ancient ruins and lush jungle to discover the secrets of the Mayan pyramids on this tour of Tikal and Yaxha from Guatemala City.
US$ 528
Book