Discover Seville's unique colours on this day trip from Isla Canela that will show you the magic of the Andalusian capital alongside an expert guide. 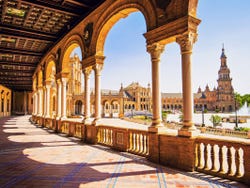 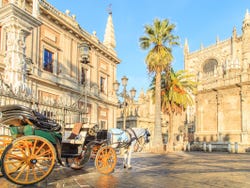 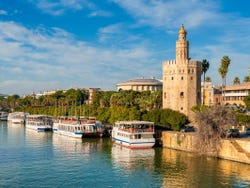 We'll pick you up in a bus from your hotel in Isla Canela first thing in the morning and set off for Seville, the capital of Andalusia and one of the most culturally rich places in Spain.

In Seville, we'll begin our day with a panoramic tour of the city. Alongside our local guide, we'll go to the Ibero-American Exposition of 1929, where we'll visit the Parque de María Luisa park and the Plaza de España, one of the most famous landmarks in the city.

Then we'll wander through the Santa Cruz neighbourhood, which was an ancient Jewish district in the Middle Ages. We can take a stroll and see some of the typical Sevillian courtyard houses, and during our tour, we'll walk past the Real Alcázar of Seville, a fortified palace of Islamic origin that is a registered UNESCO World Heritage Site.

Those interested in Spanish colonialism will get the chance to visit the General Archive of the Indies where all the information related to the administration of Spanish colonies in the Americas and the Philipines is stored.

At this stop, there will be a guided tour around the Cathedral of Saint Mary of the See, the largest cathedral in the world. As we will learn during the visit, it was built on the land that remained after the demolition of the ancient Aljama mosque of Seville, preserving its patio known as the Patio de Los Naranjos (the orange tree patio) and its minaret, the well-known Giralda clocktower.

To end the day you'll have some free time to eat and continue discovering the magic of Seville as you please, before we drive you back to the hotel.

8 / 10 4 reviews
Are you looking for fun plans while visiting Isla Canela? How about this adrenaline-pumping experience. With this jet ski tour, you'll have a great time.
US$ 118.10 per group
Book
like

8.50 / 10 8 reviews
Make the most of your stay in Isla Canela and go on this trip to the Algarve, the most visited and beautiful region in Portugal thanks to its incredible beaches
US$ 58.40
Book
like

No rating yet
Discover Huelva, Seville or the Algarve on a unique and exclusive private tour with an expert guide for you and your partner, family or friends.
US$ 328 per group
Book