Do you want to discover the legends, mysteries and love stories that surround Jaen? Explore its streets to learn about its lesser-known history and tour its historic centre at nightfall. 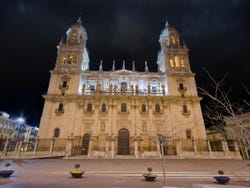 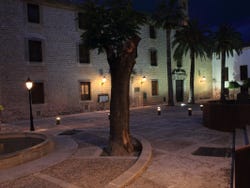 On this tour we'll visit the old part of the Andalusian city, getting to know its most emblematic places and the most mysterious stories. Discover the Cathedral, the Barrio de la Merced, the San Lorenzo Arch and the Plaza San Francisco.

We'll also visit several of Jaen's hidden treasures and tell you all about the most intriguing secrets and legends of the city. But not everything will be a mystery, we'll also recount the love stories of its palaces, squares and monuments.

Its Iberian, Islamic and Jewish past means that Jaen is home to a large number of haunted houses, surprising treasures and incredible legends. Did you know that in the Magdalena district there was a lizard that attacked passersby? Or that the ghost of an orphaned child runs around its Cathedral? Enjoy an unforgettable tour under the starry night sky of Jaen.

The itinerary maybe subject to slight modifications on special dates such as Easter, Carrera de San Antón, the Three Kings Parade, Carnival and the San Lucas Fair and/or changes for other events in the city.

Entry to the different monuments and palaces.

US$ 11.90
Free cancellation up to 48 hours before the service starts
Book

9.60 / 10 46 reviews
Its magnificent façade makes Jaen Cathedral one of the most remarkable works of the Spanish Renaissance. On this guided tour we'll find out all about it!
US$ 11.90
Book
like

9.50 / 10 23 reviews
Visit the best-preserved Arab baths in Europe with this Arab Baths and Villardompardo Palace Tour. Discover the washing ritual during the Andalusian period.
US$ 11.90
Book
like

9.30 / 10 12 reviews
Satanic rituals or accidental deaths? The crimes of Jaén raise many unanswered questions. Discover them, if you dare, with this night walk of the town.
US$ 11.90
Book