Uncover the secrets of Kiev's metro on this guided underground tour. Learn all about its history, admire its peculiar decoration and explore the deepest station in the world. A truly original experience! 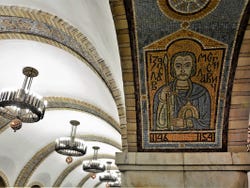 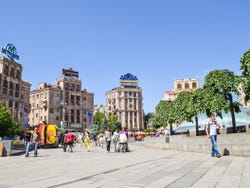 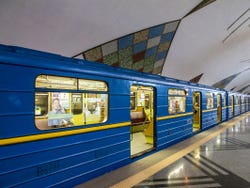 Meet your guide next to the Globe Column, in Kiev's Independence Square, or Maidan Nezalezhnosti, ready to start your guided tour of the Ukrainian capital's most used method of public transport and one of the first built in the former USSR. From here, you'll head underground into the Maidan metro station and climb aboard one of the city's typical bright blue railcars.

You'll then begin your route around the main stations of the Kiev metro system, learning interesting facts about their history and observing the different art and architecture found in each one. Pass through Khreschatyk station before arriving at Arsenalna, the deepest station in the world, built 346 feet, or 105.5 metres, below ground. Here, you'll resurface from the metro out into the historic Pechersk neighbourhood where you'll have time to take photos of the monuments and the famous former Arsenal Factory, from which the metro station takes its name.

Next, you'll head to Zoloti Vorota, or Golden Gate, considered to be the city's most beautiful metro station. You'll soon see why - as well as elegant lamps lighting the tunnels, the walls and ceiling arches are richly decorated with distinct mosaics. The murals depict different images representing the country's cultural heritage, including the Grand Princes of Kievan Rus', Slavic mythical creatures and ancient churches. Your guided tour of Kiev's metro will also take you to the historic Teatralna and Universytet stations, and the contemporary-style Golosiivs’ka and Hippodrome stops.

The guided tour will end at Kontraktova Ploscha station.

If you'd like to get to know more about Ukrainian culture, why not combine this activity with a food tour of Kiev?

We recommend bringing cash on the day of the tour to purchase tickets for public transport and entry to any monuments, both for you and your guide.

US$ 31
Free cancellation up to 3 days before
Book

9.40 / 10 28 reviews
Chernobyl and Pripyat are sadly infamous due to the 1986 nuclear disaster. Experience the ghost town and see the destruction caused.
US$ 103.70
Book
like Free

10 / 10 3 reviews
Explore the Ukranian capital city of Kiev on this walking tour and discover its most iconic monuments. And the best part? It's free!
Free!
Book
like

No rating yet
Discover one of Kiev's most striking features on this tour of its street art and murals with an exclusive guide just for you and your group.
US$ 29.80
Book