The 16th century Castle, the Basilica of Santa Maria di Collemaggio, the Fountain of the 99 Spouts... Discover the historic centre with this L'Aquila Guided Tour, and learn more about the history of the fascinating capital of Abruzzo. 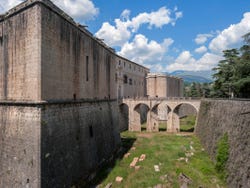 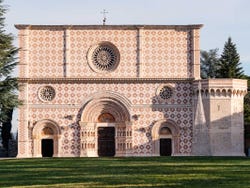 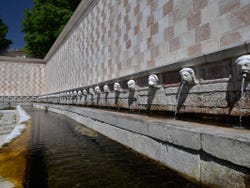 We'll meet at 9:30 am near the Fontana Luminosa, at Piazza Battaglione degli Alpini, to begin our guided tour of the Eagle. Ready? We're off!

Accompanied by a local guide we'll walk through the streets of the historic centre, one of the most interesting in Italy. This is down to its spectacular monuments, returned to its former glory after the earthquake of 2009, thanks to the reconstruction work that lasted more than a decade.

We'll arrive at the park of the 16th century Castle, called the Spanish Fortress, to learn about the fascinating history of the foundation of L'Aquila. Continuing on, we'll see some of the most important monuments of the city, reconstructed to perfection, the Basilica of San Bernardino, the Church of Santa Maria del Suffragio, known as the "Church of the Holy Souls", and the Basilica of San Giuseppe Artigiano.

Soon the sweetest moment of the day will arrive... In a historic cafeteria, we'll taste some tender nougat with chocolate from L'Aquila, a variant of the almond nougat produced in the city of Abruzzo since the 19th century and considered an Italian culinary delicacy.

Afterwards, we'll reach the Basilica of Santa Maria di Collemaggio, an extraordinary masterpiece of Abruzzo architecture, as well as the symbol of the city. Did you know that, in August 1294, Pietro da Morrone was elevated to the papal throne right here, taking the name of Celestine V?

The tour will end after spending 2, 5 or 3 hours discovering the main points of interest in L'Aquila.

The activity takes place with a guide that speaks en english and other language.

Tasting of traditional nougat with chocolate from L'Aquila in a historic cafeteria.

US$ 64.70
Free cancellation up to 48 hours before the service starts
Book