With this activity from La Vecilla you'll practice caving in the Tibigracias or El Arenal caves, two spectacular caves located in the northern part of the province of León! 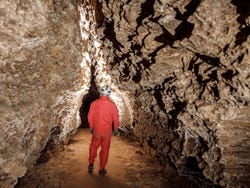 We'll meet at the time of your choice at the bar Las Hoces, located in front of the Feve train station in La Vecilla. From this town in Leon, we'll head to the Tibigracias or El Arenal caves. The guide will choose one or the other, both level II, depending on the weather conditions and the characteristics of the group.

You'll have to make your way to the cave in your own vehicle. You'll follow the monitor's car at all times, so you won't need a GPS. Once we arrive at the main entrance to the cave, we'll get kitted out in a protective suit, booties, gloves, harnesses and helmets equipped with a head torch.

Then we'll enter the cave, where we'll see large underground cavities up to 60 metres in height. We'll also see a large group of karstic-type geological formations such as stalactites, stalagmites, casts and micro lakes. We'll go through several underground rivers of crystalline water and abseil down waterfalls more than 20 metres high - a real adrenaline rush!

After the caving experience, which will last between two and four hours depending on the group's pace, we'll return to the starting point in La Vecilla.

It's a large cave located in the gorges of Valdeteja. It has several tunnels, many are 1000 metres long and 40 metres of uneven terrain. In addition, inside we'll see an underground river along withseveral crawlways and flooded passages.

This cave in the surroundings of Valdeteja also has, like the previous one, a large underground river and various karstic formations such as stalactites and stalagmites. The El Arenal cave has several sections that are a little narrower than the Tibiglas cave.

Both Tibigracias and El Arenal caves are level II, and therefore require good physical condition. If you wish to explore another less demanding cave in Leon, we recommend you book the initiation caving activity in the Donkey Cave. This experience, which will take place in a level I cave, will start in Vegacervera: a small town located only 20 minutes by car from La Vecilla.

The activity takes place with a guide that speaks en english, although it may occasionally be done in two languages.

Necessary equipment for the activity.

Transport to and from the caves.

US$ 41.20
Free cancellation up to 48 hours before the service starts
Book