Found in the North of Malta, the Popeye Village still has the film sets used in the recording of the famous '80s film about the popular sailor. Fancy meeting him? 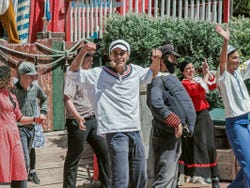 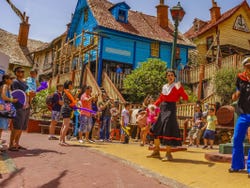 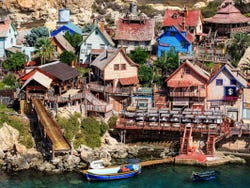 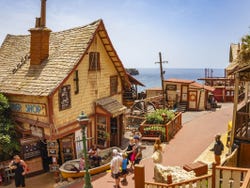 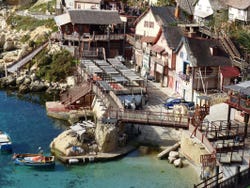 Having picked you up at your hotel, we make our way to the Ancla Bay, where at the end of the '70s, in this paradise stretch of northern Malta, they built a series of film sets to recreate the Sweethaven village, the fictitious home of Popeye. He was brought to life in a film of the same name starring Robin Williams, which premiered in 1980, and the majority of that film was filmed in this exact location on the Maltese archipelago.

Once we arrive at the Popeye Village, a theme park which keeps the original charm of the Sweethaven film set intact, you'll have free time to tour its streets. You'll really think you're heading back in time to the very places where Robin Williams japed around, in the skin of the famous, spinach-loving sailor man.

Click below to see all the installations available in the park.

Plan of the Popeye Village

In the evening the tour meets again in front of the Popeye village, to begin the return journey to the various hotels of Malta.

Hotel Pick Up in Malta

This tour includes hotel pick up between 9 and 9:45 am in the main hotels on Malta. Having made your reservation we'll contact you to confirm the exact time and place.

Transport in an air conditioned minibus.

The indigenous community participates in the management of the activity.

US$ 36.30
Free cancellation up to 24 hours before the service starts
Book

10 / 10 1 review
Get onboard a catamaran and discover the beauty of Malta by sailing its best beaches and bays. You'll love the exquisite views and the turquoise waters.
US$ 42.30
Book
like

9 / 10 82 reviews
Found to the East of La Valeta port, the towns of Vittoriosa, Cospicua and Senglea, known as 'The Three Cities' have a long cultural heritage.
US$ 39.90
Book
like

8.80 / 10 17 reviews
Explore one of Malta's most charming locations with this Comino Island & Blue Lagoon Cruise. Visit the famous blue lagoon and snorkel in the marina.
US$ 30.20
Book