Enjoy this Orvieto Underground Tour in which you'll discover the city's 400 caves and grottoes. Thousands of years of history await you on a guided tour that includes an appetizer. 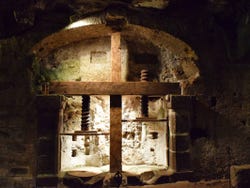 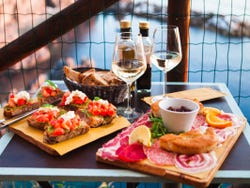 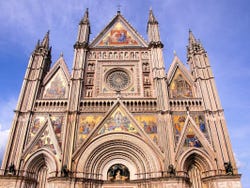 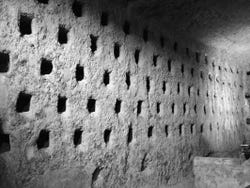 After meeting at the Piazza del Duomo at 12:15 pm, we'll enter the Orvieto's underground city. We'll walk for an hour through countless tunnels that have been running through the city for over 2,500 years.

The underground city is formed by over 400 caves, they have been used for many reasons, including wine coolers, pigeon farms, and water conveyance systems. During the tour, the guide will explain more about the history of the caves.

We'll go into the city's Etruscan past, and then go on to Ancient Rome and the Middle Ages, looking at objects from these periods, such as olive presses, grinding stones, fireplaces and wine cellars.

Once the underground visit is over, we'll enjoy an appetizer at the Cantine Foresi, next to the Piazza del Duomo. The owner of the premises will also show us a private cave that he still uses as a wine cellar. The tour will end around 2:15 pm in the same Piazza del Duomo.

We'll enjoy the appetizer on the terrace of the Cantine Foresi while admiring an unbeatable view of the façade of Orvieto's Cathedral.

The temple, which dates back to the 14th century, is a perfect example of Italian Gothic art and its construction lasted nearly 100 years. It will attract your attention with its colourful exterior mosaics and its central rose window.

On rainy days we'll also taste this appetizer, but the reservation will be enjoyed inside the premises.

If you have any kind of food intolerance you must indicate it when you make the reservation. Cantine Foresi can make changes to the menu to suit your needs, except for gluten-free meals which are not included.

Entry to the Orvieto undergound city.

Appetizer next to the Duomo, including white wine, charcuterie and local biscuits.

US$ 50.90
Free cancellation up to 48 hours before the service starts
Book

No rating yet
Discover the history and cultural heritage of this Italian city by booking this Orvieto Private Tour. You'll have an English speaking guide at your disposal.
US$ 193.90 per group
Book