Stately homes, Renaissance palaces, squares and fountains...Admire the treasures of the old town of Baeza onboard this tourist train. 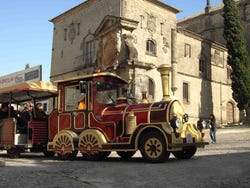 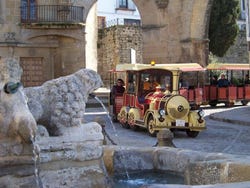 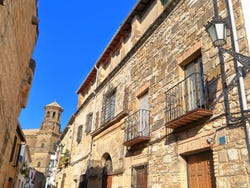 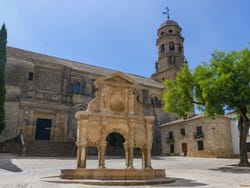 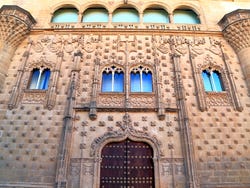 The route starts in Plaza de los Leones, a square outside the original city walls of Baeza, and which is home to buildings such the Carnicerías Públicas (old butchers' shops), the Clerkship and the Civil High Court as well as the Villalar Arch, the Azacaya Gate and Los Leones Fountain. The train will continue along the town's streets until reaching the Plaza de España.

We'll approach the old walls, next to the clock tower and the Úbeda Gate, before continuing to admire the views of the Guadalquivir Valley that inspired Spanish poet Antonio Machado.

We'll explore the medieval streets, which have been the backdrop to numerous films, until we reach Plaza de Santa María, the monumental heart of the city. We'll admire the Santa María Fountain, the San Felipe Neri Seminary and the San Isidoro and Nuestra Señora de la Natividad Cathedral.

On the final part of the tour, we'll see the majestic Jabalquinto Palace and the old 18th-century university. The train ends its journey back where it started in Plaza de los Leones.

The train runs every day and leaves every 45 minutes from Plaza de los Leones. All you need to do is show your ticket and then you can board the train whenever you want during the following times:

The train ride lasts around 30 minutes and starts and finishes in the same place.

The capacity of all means of transport will be reduced to 40% of their maximum capacity.

The activity takes place with recorded commentary in in english.

30 minute tourist train ride around the historical centre of Baeza.

US$ 5.40
Free cancellation up to 8 hours before the service starts
Book

Free! Free cancellation up to 8 hours before the activity starts. If you cancel under this time or do not show up, you will not be refunded.

The tour is very interesting since it shows the main sites of the city to visit, telling its history, so it helps you identify which sites to visit after the ride Opinion translated. Show original.

10 / 10 1 review
Discover one of the jewels of the Spanish Renaissance when you take this fantastic private tour of Baeza with a professional guide.
US$ 121 per group
Book