Discover Bologna with this walking tour that will take you into the heart of the ‘Red City’. You will stroll its beautiful streets and visit its most iconic landmarks. 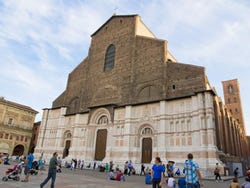 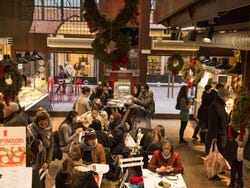 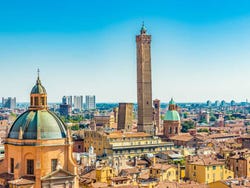 We will start our tour on the Via dell'Indipendenza and head down the porticoed streets. As you admire the majestic column architecture, you will be transported back to a different epoch.

Our next stop in this medieval city is the main square, considered one of the most beautiful in Europe and which was important in the Middle Ages for its popular celebrations and public executions.

In the Main Square, we will also encounter the San Petronio Basilica, a historic place where the coronation of Charles V was carried out on the part of Pope Clemente VII in 1530.

This is one of the largest religious buildings in the world, but it mysteriously remains unfinished. We will reveal why during your tour.

Only a few meters away you will come to the Archiginnasio, which was once the main campus of the oldest University in the western world but today is home to the municipal library of over 850.000 books.

We will then go to the Mezzo market, one of the quintessential locations for the city’s fine gastronomy. Since the middle ages, it has been a central meeting point for people to taste delicious food and do business in Bologna. Are you eager to find out why?

To end out route, we will pass the Basilica of Santo Stefano in the square of the same name, and we will see Asinelli and Garisenda, the Two Towers of Bologna, the most iconic symbols of the city.

US$ 29.80
Free cancellation up to 48 hours before the service starts
Book

Free! Free cancellation up to 48 hours before the activity starts. If you cancel under this time, you will be refunded 50%. If you do not show up, you will not be refunded.

9.20 / 10 12 reviews
Discover enchanting Bologna in a different way by pedaling among its most important monument. From your comfy bike, you will discover the main sights.
US$ 41.70
Book
like

10 / 10 6 reviews
Create lasting memories of your trip to Bologna with this photography tour. You can even choose if you prefer to walk or cycle... just don't forget your camera!
US$ 29.80
Book
like

No rating yet
Taste the delicious cuisine in this beautiful Italian city with this Bologna Food Tour. As you treat your tastebuds you'll visit some of the city's monuments.
US$ 59.60
Book