Discover the elegance and the most important American music stars that have come together on this imposing stage. Discover the legendary venue with this Chicago Theatre Tour! 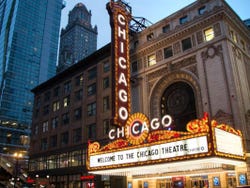 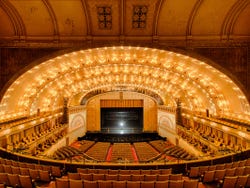 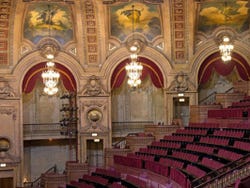 The Chicago Theatre is the most famous theatre in the city, and one of the most important in the United States. It was inaugurated in 1921, with an elegant and very luxurious style. The impressive hall was inspired by the Royal Chapel of Versailles. The theatre also stands out for its size, as its stalls reach seven floors high and it has a capacity for 3600 people.

The Theatre experienced four decades of splendour until the end of the 1970s when the city's economic and social situation caused the auditorium to sink into a deep crisis, which led it to become a decadent cinema. Fortunately, in 1986 the theatre was saved from demolition and, after large investments, it was reborn. Its doors reopened with an unforgettable opening ceremony with a concert by Frank Sinatra.

Since then, artists including Alicia Keys, Dolly Parton, Prince, Oasis and Van Morrison have performed at the Theatre.

During the Chicago Theatre tour, we'll learn about its history from a professional guide while walking through the elegant main lobby, climbing the luxurious staircase and more. You'll be surprised by the size and acoustics of the auditorium.

We'll also visit the Theatre's dressing rooms and climb up to the same stage where artists such as Frank Sinatra and Dean Martin have enamoured audiences.

At times, some areas of the Chicago Theatre may be restricted during the tour due to the shows that take place there.

A great guided tour to know the history and curiosities of the theater. Opinion translated. Show original.

No rating yet
Cruising down the Chicago River is one of the greatest ways to get to know the iconic city and discover how it became the birthplace of the skyscraper.
US$ 44.69
Book
like New

9.10 / 10 224 reviews
Discover the magic of the 'Windy City' on this tour and explore downtown Chicago to admire its beautiful architecture.
US$ 49
Book
like

8 / 10 8 reviews
Discover the best of Chicago's modern and green spaces on this guided tour. See the city's most emblematic places with your own personal tour guide!
US$ 240 per group
Book