Delve into the rich history of Dubrovnik on this complete guided tour of the Old Town, listed a UNESCO World Heritage site since 1979, with an expert English speaking guide. 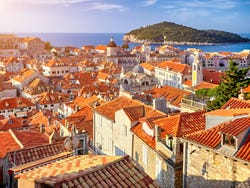 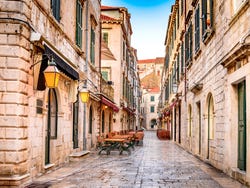 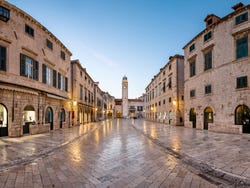 Greet your guide near the Pile Gates, in the heart of Dubrovnik, built as a fortification complex when the city was part of the Republic of Ragusa. The Republic was one of the main rivals of Venice, especially during the fifteenth and sixteenth centuries. From here, follow your professional guide on a one-and-a-half hour walking tour of the city’s historic center and admire its most important landmarks while you learn about the fascinating past of this charming seaport.

Your first stop will be at the Franciscan Monastery, a building that dates back to the fourteenth century, although it has undergone several reforms since the devastating earthquake of 1667. Located inside the monastery is a pharmacy managed by the Franciscan monks and opened 700 years ago. In front of the Monastery, you can cool down at the Large Onofrio’s Fountain. Afterwards, wander down Stradun, also known as Placa, Dubrovnik’s main thoroughfare that runs through the Old Town.

When you get to Luža Square, home to the Sponza Palace, you will admire Orlando’s Column, symbol of the independence of Ragusa. Then, you will walk past the Small Onofrio’s Fountain before you get to the Rector's Palace, seat of the Rectory of the Republic of Ragusa. Currently, this Gothic-style building houses the Museum of Contemporary History of Dubrovnik.

The guided tour will come to an end in the alleyways adjacent to the Cathedral, set of numerous scenes from the world-famous “Game of Throne”. During the walking tour of Dubrovnik, you will have discovered over 1400 years of history.

Visiting the interior of the buildings and monuments.

You can book up until 15 minutes before the activity as long as there are still places. Book now to guarantee your spot.

Wheelchair accessible. An accompanying person is required. This must be indicated in the reservation.

US$ 21.70
Free cancellation up to 24 hours before the service starts
Book

Excellent guide. Personable and very informative. Would recommend to any visitors to Dubrovnik

8 / 10 58 reviews
Cruise along the spectacular Croatian coastline and discover three of the Elaphiti Islands. Explore Koločep, Šipan and Lopud at your own pace on this boat trip.
US$ 58.10
Book
like

9 / 10 33 reviews
See the sunset from the Dubrovnik docks, and enjoy a romantic dinner on board a beautiful 16th-century boat. An unforgettable experience.
US$ 93.20
Book
like

9.70 / 10 23 reviews
What better way to experience sunset over breathtakingly beautiful Dubrovnik and its ancient city walls than kayaking out to sea along the Dalmatian Coast?
US$ 42.30
Book