Visit the best-preserved Arab baths in Europe with this Arab Baths and Villardompardo Palace Tour. Discover the washing ritual used during the Andalusian period. 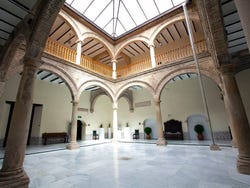 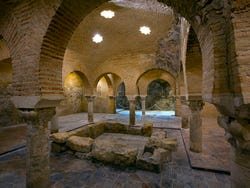 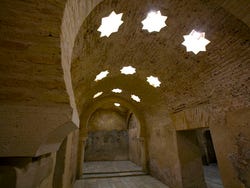 We'll meet at the Arab Baths Cultural Centre to begin a tour of the Villardompardo Palace, a 16th century Renaissance building under which the Baths are located.

The guided tour will begin at the Palace, the residence of the First Count of Villardompardo and Viceroy of Peru, Fernando de Torres and Portugal. Built in the 16th century in an unbeatable location in the heart of the historic centre of Jaen, it has passed through different owners and functions.

We'll also visit the two museums that are currently inside it, first the Museum of Popular Arts and Customs, a reflection of the crafts that have been lost throughout the city's history. Then we'll visit the Naïf Art Museum, unique in Spain.

We'll continue into the largest Arab Baths in Europe, with an area of 450 square meters. Dated in 1002, they are a sample of the operation and washing ritual carried out by the Muslim population. During the tour, we'll see the four rooms of these traditional Arab baths.

After approximately an hour and a half, we'll end our guided tour on the Terrace-Viewpoint, with fantastic views of the city.

Visit to the Arab Baths.

Visit to the Museum of Popular Arts and Customs.

Visit to the Museum of Naïf Art.

US$ 12.10
Free cancellation up to 48 hours before the service starts
Book

9.70 / 10 84 reviews
Do you want to discover the legends, mysteries and love stories that surround Jaen? Explore its streets to learn about its lesser-known history at nightfall!
US$ 12.10
Book
like

9.60 / 10 44 reviews
Its magnificent façade makes Jaen Cathedral one of the most remarkable works of the Spanish Renaissance. On this guided tour we'll find out all about it!
US$ 12.10
Book
like

9.30 / 10 11 reviews
Satanic rituals or accidental deaths? The crimes of Jaén raise many unanswered questions. Discover them, if you dare, with this night walk of the town.
US$ 12.10
Book