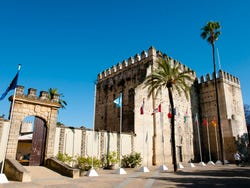 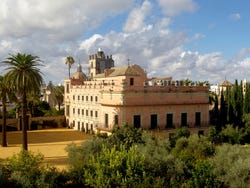 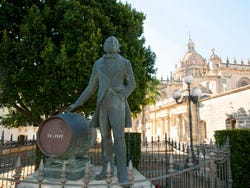 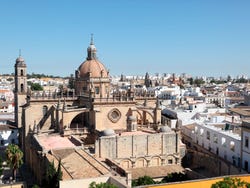 After meeting your guide at 11 am in Plaza del Arenal, Jerez de la Frontera's beautiful main square, you'll begin your two-hour walking tour around the city's most important and representative historic buildings and monuments.

The first stop on your route will be the imposing Alcazar of Jerez, one of the very few examples in Spain of architecture from the 12th century Almohad Caliphate. The former Moorish palace-fortress is the oldest monument in the city.

To access the Alcazar complex, you'll enter via the Puerta de la Ciudad, or the "Gate of the City". Admire the magnificent architecture of the buildings, including the only remaining of eighteen mosques that the city used to have, which was turned into a church after the Christian conquest of Jerez. Explore the beautiful courtyards and gardens, and visit the Palacio de Villavicencio, a spectacular Baroque palace which housed the municipal pharmacy in the 19th century.

Leaving the Alcazar behind, you'll make your way to Plaza Encarnación, where the 17th century Cathedral of Jerez de la Frontera stands. Along the way, you'll see the monument to Tio Pepe, honouring the founder of the famous sherry bodegas.

Reaching the cathedral, you'll be captivated by the stunning mix of architectural styles, from Gothic to Baroque to Neoclassical. Inside, you'll discover its different chapels and the elaborate details of the religious paintings and reliefs decorating them.

Your guided tour of historic Jerez de la Frontera will come to an end around 1 pm.

Tours or activities will not consist of more than 19 people per group.

US$ 36.30
Free cancellation up to 48 hours before the service starts
Book

8.70 / 10 3 reviews
Make the most of your stay in Jerez de la Frontera with this Tangier Day Trip. Explore the charming streets in Moroccan city and discover its secrets!
US$ 180.40
Book