Cave dwellings, rock churches and giant ancient cisterns: explore Matera's historic centre in a fun and comfortable way on this tuk-tuk tour. Discover the 2019 European Capital of Culture from a new perspective! 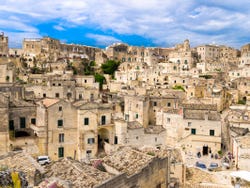 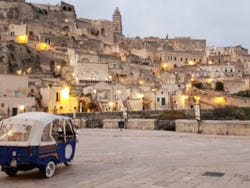 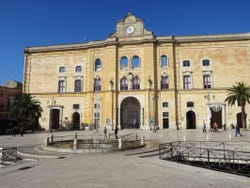 After meeting your guide in Piazza San Francesco, you'll climb on board your tuk-tuk ready to begin your tour of historic Matera. Did you know that this fun vehicle is called an Ape calessino​ in Italian?

Throughout your tuk-tuk tour, you'll make a number of different stops at the city's most important places of interest, allowing you to investigate them up close and take photos. Your first visit will be the Church of Purgatory. Built in 1747, this church stands out for its numerous architectural references to death. Discover why its façade features so many skulls and skeletons on your guided tour!

Just five minutes away from the Church of Purgatory, you'll reach Matera Cathedral. Located at the highest point in the city, this temple is known for its 52-metre-tall (170 foot) belfry, which towers over the historic centre, and whose seven bells can heard all around the city.

Climb back on board your tuk-tuk for the journey to the Church of San Giovanni, before heading deep into the famous Sasso Barisano and Sasso Cavoso neighbourhoods. These districts are home to the incredible ancient 'sassi di Matera', or cave dwellings, which have been a UNESCO World Heritage Site since 1993.

The rock-hewn houses and golden-stone streets of the Sassi districts are so reminiscent of Jerusalem that they have been used as filming locations for iconic movies including Mel Gibson's The Passion of the Christ.

Having explored Matera's most emblematic neighbourhoods, you'll reach Piazza Vittorio Veneto, a square where you'll find an archaeological site with underground rooms and an enormous cistern. The historic 'Palombaro lungo', as it is known, still served to collect and supply water for the city's inhabitants in living memory! Its rock-hewn arches and sheer size are truly impressive.

Your guided tuk-tuk tour will come to an end back in Piazza San Francesco after 45 minutes exploring Matera's main sights.

The activity takes place with recorded commentary in in english.

A very interesting, fun and informative tour. All the highlights of the sassi covered. Helpful advice at the end on how to get to the rock churches. Francesco was very pleasant and we really enjoyed our tour. Thank you!

Visiting Matera by ape car is the best choice with a guide who explains all the history of the city is wonderful Opinion translated. Show original.

Very interesting the tour absolutely to be recommended good and kind Antonio who also gave us explanations to our curiosities Opinion translated. Show original.

Courtesy, sympathy and a lot of welcome. The 45 minutes have flown, we would have liked to know more about the beautiful city of Matera. Useful service if you don't want to get lost in the thousand glimpses of the city. Opinion translated. Show original.

I travelled with small children
8

10 / 10 3 reviews
Fall in love with the stunning centre of Matera - a picturesque city in Basilicata known for its famous churches and rock-cut houses known as Sassi!
US$ 29.60
Book
like

9.70 / 10 13 reviews
Discover the ancient cave dwellings and rock churches of Matera, the European Capital of Culture for 2019, on this fascinating guided tour.
US$ 142.40 per group
Book
like

No rating yet
Explore the national park home to 150 ancient rock-hewn caves churches on this privatge tour of Murgia Park in Matera, the 2019 European Capital of Culture.
US$ 284.80 per group
Book