Discover the legendary history of Pompeii and Mount Vesuvius on this day trip from Sorrento. Learn all about one of the most famous volcanic eruptions of all time and explore the preserved ancient Roman city. 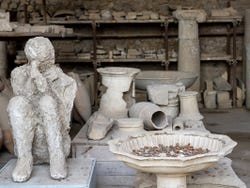 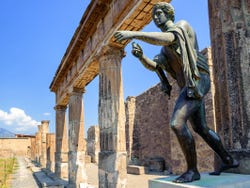 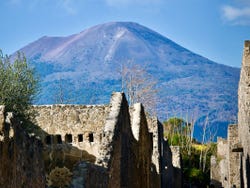 After being picked up from your hotel in Sorrento, you'll head in the direction of Pompeii, the ancient Roman city that was buried under volcanic ash when Mount Vesuvius erupted in the year 79 AD. Wandering through the streets of the former metropolis, you'll see an incredible snapshot of what life was like in Ancient Rome.

Discover the splendour of the historic city, well-preserved by the ash for over 2000 years. Temples, the basilica, the forum, the public baths and even the remains of the people who lived there have been frozen in time. Plaster casts of the victims reflect the terror they experienced in the eruption.

Your day trip will then continue, heading next to Mount Vesuvius, a volcano of over 4200 feet (1200 m) in height. It is still considered to be one of the most dangerous volcanoes in the world, and is the most populated volcanic region in the world, with three million people living in its vicinity. Hear about the mythology surrounding the peak - does the name Hercules sound familiar to you? This legendary personality appears in several stories about Vesuvius.

At the end of your excursion to Pompeii and Mount Vesuvius, you'll return to your hotel in Sorrento.

The capacity of all means of transport will be reduced to 40% of their maximum capacity.

Pick up and drop off at hotel.

Skip the line entry to the Pompeii archaeological site.

US$ 106.10
Free cancellation up to 24 hours before the service starts
Book

we really enjoyed the tour. The guide could tell that she knew a lot about the subject and even told us that she had worked as an archaeologist in Pompeia itself. Opinion translated. Show original.

9.30 / 10 3 reviews
Embark on a tour of the Sorrento countryside and discover its lemon growing culture. Learn all about the industry, and try the famous limoncello: Delicious!
US$ 71.50
Book
like

Excursion to Capri by Boat

9.20 / 10 93 reviews
Climb on board a comfortable boat, and skirt the coast of the famous island of Capri, visiting its coves and its natural arch.
US$ 113.30
Book
like

No rating yet
Live an unforgettable experience flying over the Gulf of Naples with this Capri, Pompeii & Vesuvius Helicopter Tour. Admire unique views of the Italian coast.
US$ 656.20
Book