Discover the house where William Shakespeare was born: the man who is, for many, the greatest writer of all time. Follow in his footsteps on the stage where his adolescence and first years of marriage played out! 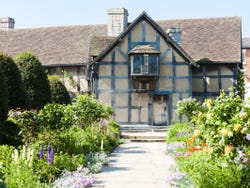 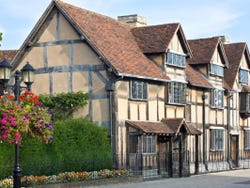 The William Shakespeare house has been converted into a sanctuary for lovers of the legendary writer. The largest house on Henley Street is the perfect introduction to his childhood, teenage years, and even his first years of marriage to his wife Anne Hathaway. The delightful gardens are the first point of call, welcoming you to the cosy 16th-century house, which still bears its original wooden beams, giving it that distinctive Elizabethan look, and transporting you back in time.

During the tour, you'll pass through the rooms where the great man wrote some of the most famous pages of literature the world has seen, and discover the places where he ate slept and played. This is the place that moulded the author and has long been a place of pilgrimage for great writers, having been visited by those who followed in his footsteps: Charles Dickens, John Keats, Walter Scott, and Thomas Hardy.

Since 2016, which was the 400th anniversary of Shakespeare's birth, the house has played host to the "Famous Beyond Words" exhibition, which takes guests through the life of Shakespeare and his major works. You can see copies of his first editions up close, and the exhibition even contains a collection of art which belonged to the man himself. And if you really want to dig deep into Shakespeare's history, don't miss the timeline with its family tree, which even includes a surprise!

Entry to the Famous Beyond Words exhibition.

Most areas are accessible.

All services published on Civitatis are carried out in accordance with our Sustainability Code.

No rating yet
Discover the hometown of Shakespeare and its main attractions onboard the Stratford-upon-Avon tourist bus and hop on and off as many times as you like!
US$ 20.90
Book
like

No rating yet
Explore the medieval town of Stratford-upon-Avon, famous for being the birthplace of England's most famous writer with this Shakespeare's England Explorer Pass.
US$ 32.10
Book