From its picturesque historic Jewish Quarter to its impressive Cathedral overlooking the Adriatic Sea, Trani is a postcard-perfect town just waiting to be discovered. Explore it on this private tour with an exclusive English-speaking guide. 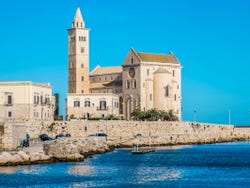 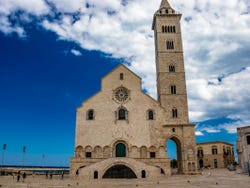 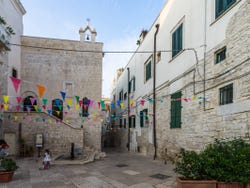 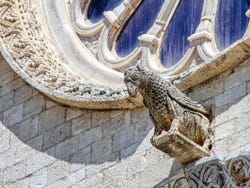 Meet your guide at the scheduled time in the lively Piazza Re Manfredi, a square in the heart of the historic centre just a stone's throw from Trani Castle and the Cathedral, the town's most important tourist attraction.

Entering inside this impressive seafront church, an important example of Apulian Romanesque architecture dating back to the 12th century, you'll be captivated by the details of the beautiful building and by the history of Saint Nicholas the Pilgrim, to whom the church is dedicated.

Continuing onwards, you'll walk alongside the port and admire the sea views, before reaching the Giudecca, Trani's historic Jewish Quarter. As you explore the Medieval Jewish district of the town, you'll soon understand the role played by the Hebrew community in Trani's history. Make a stop at the former synagogue now known as Sant'Anna Church and visit the fascinating museum dedicated to the Jewish people of Apulia and their history.

After visiting the synagogue museum, your private guided tour of Trani will come to an end.

Private and exclusive tour, there will be no one else in the group.

Entrance to the Sant'Anna Synagogue.

Per group from
US$ 142.40
Free cancellation up to 48 hours before the service starts
Book

Show all the reviews