Discover the ancient cave dwellings and rock churches of Matera, the European Capital of Culture for 2019, on this fascinating guided tour of what is considered to be one of the oldest continually inhabited settlements in the world. 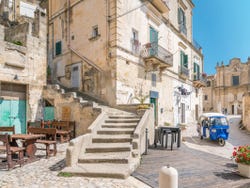 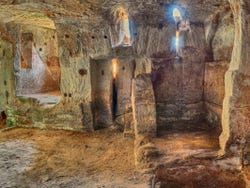 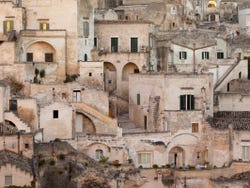 You'll meet your guide at the time you selected in the Piazza Vittorio Veneto that dates back to 1880, where you'll begin your guided walking tour of Matera. You'll spend two hours exploring the historic centre of this fascinating southern Italian city.

You'll enjoy panoramic views of the Sassi, the ancient cave dwellings for which the city is famous. A designated UNESCO World Heritage Site, these rock-carved homes have been inhabited since prehistoric times, and are among the first human settlements in Italy.

As you continue your walking tour through Matera's main streets, you may well recognise the historic golden-stone architecture... it has been compared to Jerusalem on a number of occasions, and has been used as a filming location for the religious city in any number of movies, including Mel Gibson's The Passion of the Christ. It also recently featured in Wonder Woman!

On our tour, we'll pass the Matera Cathedral, a magnificent example of 13th-century Apulian Romanesque architecture. Did you know it's located at the highest and oldest point of the city? Next, you'll have the opportunity to visit a few of the Sassi for which Matera is best-known, learning all about the origins of the cave dwellings.

Our final stop will be one of Matera's four Rupestrian, or cave, churches: the Chapel of Sant'Antonio Abate. Entering the church, you'll discover the ancient cave paintings decorating the rock-hewn walls and ceiling.

When you book one of our private tours, you benefit from having an exclusive English speaking guide just for you and your group. What's more, if you're a larger group, you'll save money too!

Private and exclusive tour: there will be no one else in the group.

Per group from
US$ 143.10
Free cancellation up to 3 days before
Book

10 / 10 1 review
Fall in love with the stunning centre of Matera - a picturesque city in Basilicata known for its famous churches and rock-cut houses known as Sassi!
US$ 29.80
Book
like

No rating yet
Explore the national park home to 150 ancient rock-hewn caves churches on this privatge tour of Murgia Park in Matera, the 2019 European Capital of Culture.
US$ 286.30 per group
Book