Feel the rhythms of Montevideo Carnival when you witness one of its most famous street parades - the 'Desfile de Llamadas' (The Calls Parade). You will love the troupes of drummers and dancers performing the colonial slave tradition of Candombe. 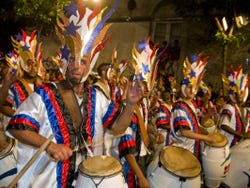 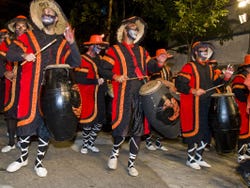 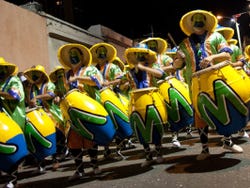 After collecting you from your hotel in the Uruguyuan capital, we then head directly to the districts of Palermo and Barrio Sur to watch the vivid performances of Montevideo Carnival. This is the Calls Parade, and the catchy rhythms and hypnotic drum beats will leave you spellbound from the start.

From our seats in the carnival stands, we will watch the parade troupes pass through the streets performing the enchanting Candombe dances. They are closely followed by the 'cuerda de tambores' drummers providing the infectious grooves. Each troupe is composed of 50 musicians playing three different types of drum - the high range 'chico', the tenor 'repique', and the bass 'piano'.

While watching the show, we will also learn all about the history of this tradition steeped in Uruguayan and African cultural heritage. Its origins are in the colonial era when the descendants of black slaves would play candombe in the streets during carnival time. The drums were used as a way to 'call' the attention of the residents of the neighborhood. This is how the performance earned its name.

When the parade has concluded, we will return to your hotel in Montevideo.

If you don't want to miss the opportunity of seeing the Calls Parade at the Montevideo 2022 Carnival, which is celebrated on 5th and 6th February, you can book these dates in our calendar now.

Reserved seating in the stalls to watch the calls parade.

You can book up until the previous day (11:59 pm) if there are still places available. Book now to guarantee your spot.

Do not miss a colorful parade in a super friendly atmosphere. Opinion translated. Show original.

9.10 / 10 39 reviews
Discover Punta del Este and Piriápolis on this trip from Montevideo. We'll take you along Uruguay's glorious Costa de Oro coastline.
US$ 44
Book
like

7.90 / 10 25 reviews
Climb onboard the fantastic Montevideo sightseeing bus and take a fantastic panoramic tour of the city's iconic landmarks.
US$ 17.80
Book
like Free

9.80 / 10 115 reviews
Modernism and tradition combine in the old city of Montevideo. Discover its architectural legacy with this free tour around the Uruguayan capital.
Free!
Book