Discover the hidden beauty of the Costa Brava with this tour of its Medieval walled towns and castles. Explore picturesque villages, hidden beach coves and much more. 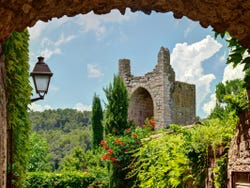 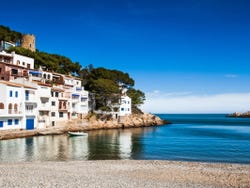 At the scheduled time, meet your guide in the historic centre of Girona, ready to begin your guided tour of the quaint villages and Medieval towns around the Costa Brava.

First, you'll visit the coastal towns of Llafranc and Calella, which are famous for their small sandy coves and historic fishing traditions. After exploring the clifftop paths characteristic of this region, you'll head to Begur, a beautiful Medieval town located on top of a hill. Here, you'll have time to climb up to the ruins of the castle, where you will have spectacular views across the Gulf of Roses.

The next stop on your tour is Pals. Climbing plants, moats, walls, and Romanesque towers make this town one of the prettiest on the Costa Brava. This area is known for its rice fields, and you'll have the opportunity to sample this locally grown product later, making a stop at one of the town's traditional restaurants. The star dish here is rice casserole (not included). After eating, enjoy a stroll through the artisan market stalls, reaching the Torre de las Horas, an ancient tower that is the only remaining vestige of the Castle of Pals, which was destroyed in the 15th Century.

Not far from Pals, you'll find one of the best conserved Medieval towns in all of Catalonia: Peratallada, whose name means "carved stone". From this pretty town, you'll head back to Girona, stopping at La Bisbal d’Empordà on the way to admire the traditional ceramic produced there.

You'll arrive back in Girona at around 6 pm.

This activity has a minimum of two participants and a maximum of six.

Transport around the towns of the Costa Brava.

Guided tour of the medieval towns of Pals and Peratallada.

US$ 142.40
Free cancellation up to 12 hours before the service starts
Book

Free! Free cancellation up to 12 hours before the activity starts. If you cancel under this time or do not show up, you will not be refunded.

Everything is great. Raquel and Carmen made us feel at home. We saw beautiful places and towns and they explained everything to us very well. Delighted with the experience. We recommend it 100%. Thank you girls for everything. Opinion translated. Show original.

It has been perfect at the agreed time and leaving the same hotel. The Carme Guide was explaining all the details of each small town and very illustrated, I recommend a great day and walking the round path Opinion translated. Show original.

9.60 / 10 269 reviews
Immerse yourself in the world of Game of Thrones on this free guided tour of its filming locations in Girona.
Free!
Book
like Free

9.10 / 10 416 reviews
Join this free tour of Girona and discover its beautiful Cathedral, cobblestone streets and Roman heritage. Plus, it's FREE!
Free!
Book
like

Dali Tour of Figueres and Cadaques

10 / 10 11 reviews
Follow the footsteps of the celebrated artist Salvador Dalí on this tour that takes you to his birthplace Figueres and to two places from his life.
US$ 148.30
Book